“The narrow path wound its way down and around, passing over the roofs of the houses, if houses they could be called. They were caves, dug unto hardened clay walls of the gully, each with its own facade, some of which were quite handsome, with eighteenth-century ornamentation.” Carlo Levi, Christ Stopped at Eboli

Matera is an ancient cave city in Basilicata located just above the instep near the heel of the boot that is Italy. Because of its stark similarity to the holy lands, several films have been made here.

A most unusual city, many people aren’t sure what to think of it. Unlike Florence, who experienced the Renaissance and a golden age, Matera experienced nothing of the sort. Life here has been difficult, especially between 1800 up until the 1950’s, when the Italian government moved over half of the inhabitants to higher ground and new homes. But in the process, the Materans lost their tight community of neighbors who worked together and shared each other’s burdens.

Today, Matera is no longer looked upon as poverty ridden and uncivilized, but is becoming cherished for its primordial ways. 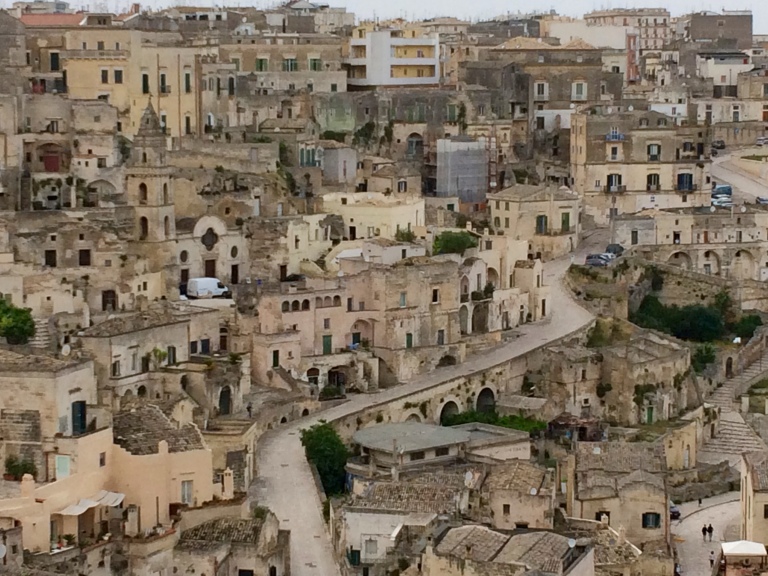 Here, in the Sasso Barisano, the skilled craftsman Eustachio Rizzi and his sons, have attempted to bear witness to a past filled with memories and emotions.

This unique place entitled “C’era una volta,” meaning “Once upon a time,” uses furnishings and sculptures to portray and illustrate life in the home, in Matera, up until the end of the 60’s.

“Once upon a time there was a family in Matera who lived in a cave cut out of rocks. Today the moments, the gestures, the rhythm of everyday life in those times are reborn…” 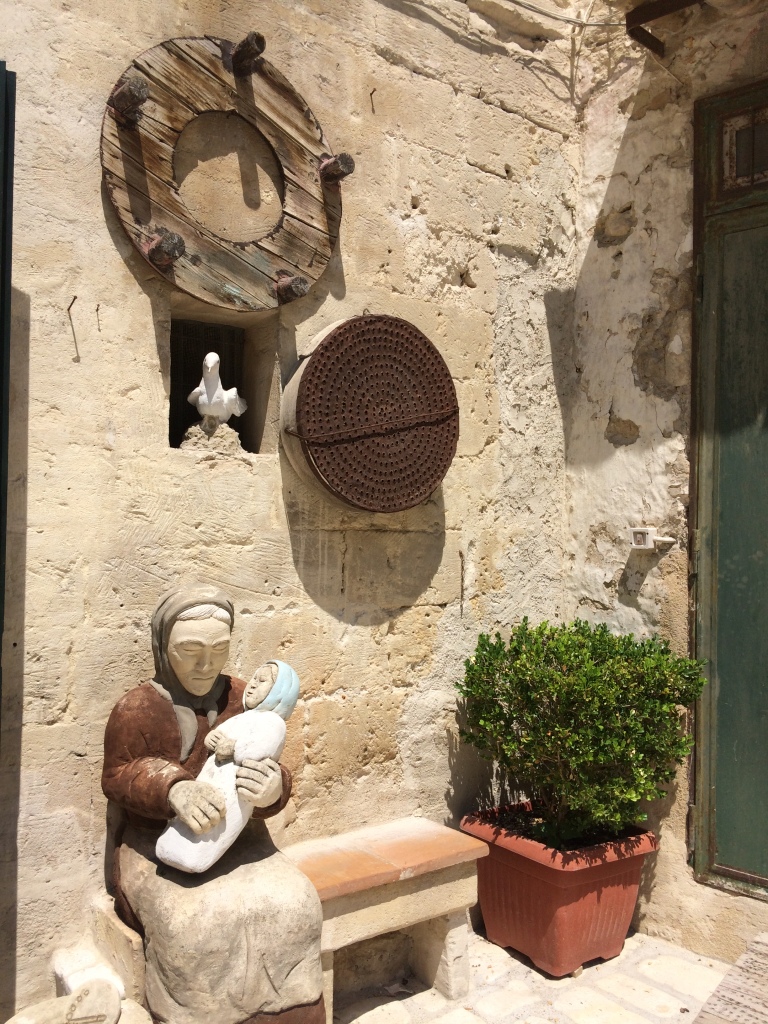 Troglodyte living is what the people of Matera knew. As an area continuously inhabited since neolithic times, Matera and the Sassi have long ago become ancient grounds, old and barren. Many of the cave dwellings consisted of only one room. Parents and grandparents generally slept in the front, with the children in the back and the animals behind them.

There was no plumbing, no electricity and no telephones. Rainwater was collected in stone basins by underground ceramic pipes. People lived one above the other where palazzi and chapels were mixed among the cave dwellings. Cemeteries were built above church roofs.

The Materans were self-sufficient and worked hard with what little they had available to them. The barren soil around them was devoid of essential nutrients to support much vegetation.

Food was hard to come by. Vito Festo, a man who grew up here in the 1950’s, remembered building bird traps that he placed on a parapet as a young boy, but he never caught any. He also remembers walking the family pig with his brother every night before putting it in its stall behind their bed.

The women baked a unique horn-shaped bread in shared ovens that were levened and baked slowly, making large pores so the bread would stay fresh for a week. The cucina povera was very simple and consisted mostly of chickpeas, fava beans, and crushed peppers. One popular dish, Ciallèdd, was made from eggs, the town bread, and flowers that grew in nearby Murgia which were often yellow asphodels.

Community was cherished and vital to the Materans. Everyone knew each other and helped one another.They developed their own dialect, rituals and songs. People lived outside in their vicinato, or courtyard-like tiny piazza. Children played, men gathered to work and talk, and the women shelled peas together.

Matera became a UNESCO World Heritage Site in 1993 and today is becoming a mecca of artists, businesses and upscale restaurants. This past October, the European Commission named Matera as one of its two capitals of European Culture for 2019.

Most places in Italy give an instant sense of wealth with glorious white marble fountains and exquisite iron balconies. Matera leaves a testament to a life of thrift and hardship where nothing is wasted. I find beauty in both.