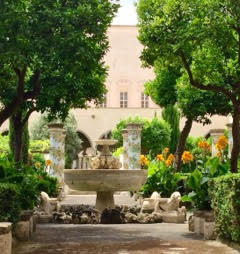 The old looming Church of Santa Chiara in the heart of Naples is well worth a break in your day. Built between 1313 and 1340, this Provençal – Gothic structure is a religious complex that includes a Franciscan monastery, tombs, an archaeological museum and a very unusual cloister garden. If you can work your way through the busy Piazza del Gesu just outside the doors, you will be well rewarded. King Robert of Anjou lies buried behind the main altar. Fragments of Giotto’s frescoes decorate the choir walls. But the real treasure of Santa Chiara is the “secret garden” tucked away behind the walls. 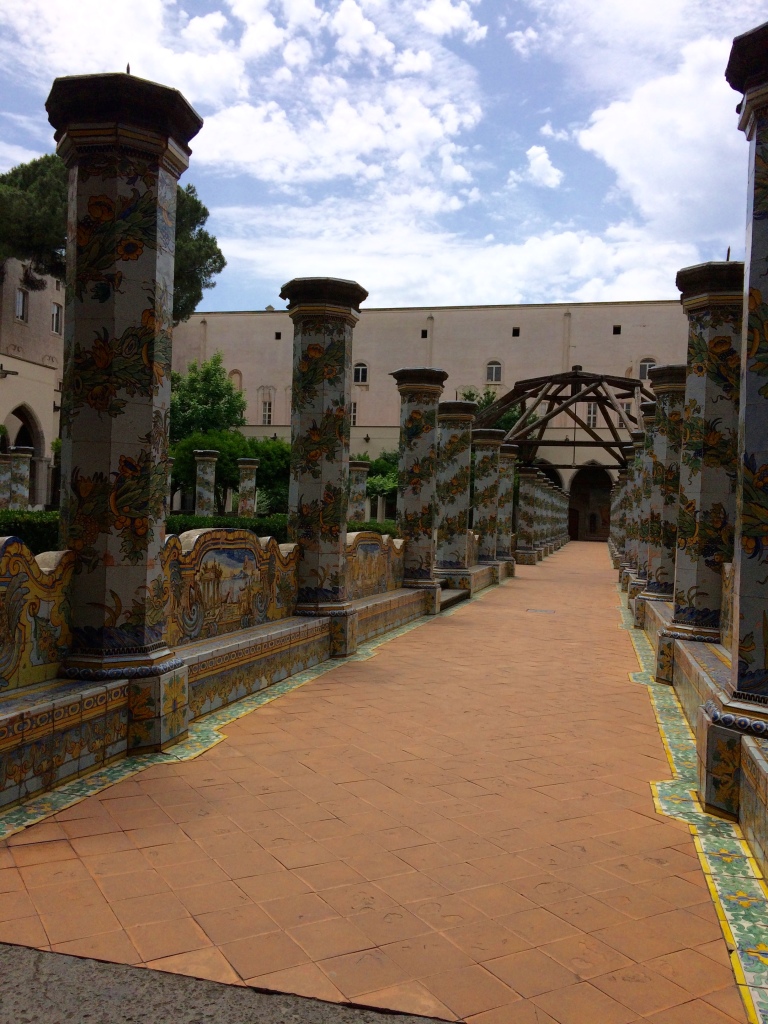 The contrast between the outer world of noise and confusion with the serene and tranquil cloister garden is immediately noticeable. It is a sanctuary of incredible and unusual beauty.

These 18th-century Rococó style tiles were hand painted by ceramists Donato and Giuseppe Massa and added to the garden after it was transformed in 1742 by Domenico Antonio Vaccaro. From that time up to 1925, the Order of the Poor Clares lived a cloistered life here. Since the sisters lived in complete seclusion the tiles were not seen by outsiders for nearly 200 years. I personally can’t imagine maintaining a prayerful mind among the liveliness and bold colors of these majolica tiles.

But in 1925, the neighboring Franciscan monks traded living quarters with the sisters. Since the monks do not have the cloistered vow, it became open to the public.

So what exactly are majolica ceramics? It originated in the Middle East during the 9th century and was imported to Italy through the Isle of Majorca in the 13th century. The Italians called it “miolica” thinking it was made in Majorca. But Majorca was only the headquarters of trade between Spain and Italy at the time. 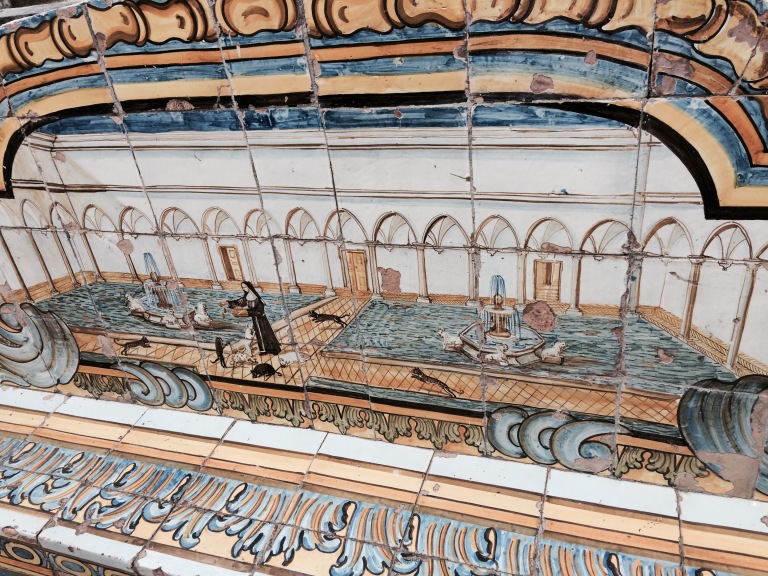 In time, Italian artisans created their own majolica ceramics depicting their own traditions and creativity. These ceramics became very popular and reached their peak of artistic quality throughout central Italy during the Renaissance (late 15th to early 16th century).

Italian majolica tiles are tin-glazed pottery that is fired a second time. The tin glazing makes a brilliant white opaque surface for painting. They were typically decorated on a white background depicting historical and mythical scenes. The ceramics are also called “istoriato” wares which mean “painted with stories.”As you look at these majolica panels, you can understand this idea.

Santa Chiara is located along the famous “Spaccanapoli,” the straight, long and narrow main street that runs through the old historic city center of Naples. It is actually one of the three Greek-Roman east to west streets (decumani) used while the city was known as “Neapolis.”

The cloister garden of the Santa Chiara Monastery, in Via Santa Chiara 49C, is open every day from 9 am to 1 pm and from 2.30pm to 5.30pm (www.santachiara.info).