Wandering the maze of streets in Rome is a favorite pastime of mine. I can’t seem to resist finding what lies around the next corner and I am often surprised by something unexpected or beautiful. On a recent late afternoon of meandering, I stepped through an archway and into the courtyard of the Palazzo Spada. I glanced through a window on the left and became suddenly transfixed. Through the office room and into the courtyard beyond I saw a long row of columns with a distinct statue at the end. I had seen this before, but where? 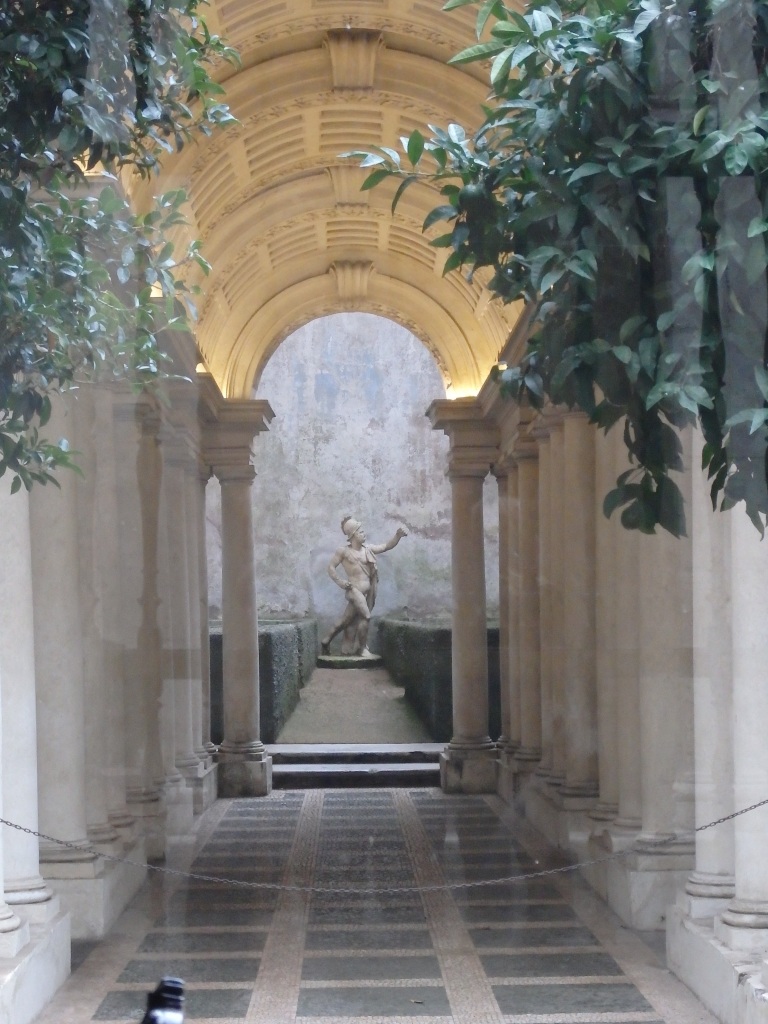 Years ago, I had seen a photo on the back page of a magazine I had found in the lunchroom at work. It was Francesco Borromini’s forced perspective gallery. I found it striking to look at, so I took it to my art history instructor. She was stunned to read about it and told me she had never known of it before. I left her with the magazine and next day it was discussed in class. I hadn’t seen or thought much about it since.

With growing excitement, I realized that I had stumbled upon Baroque architect Francesco Borromini’s forced perspective gallery inside the Palazzo Spada. Encased in a little garden of Seville oranges, it appeared as a long white colonnade with a dazzling gold ceiling. At the end was the single statue of a Roman soldier. Overcome with excitement, I dashed around the corner, paid my admission, and entered the tiny courtyard.

What is so amazing about this colonnade and statue is that Borromini created it with trickery in mind! He used optical deceit to create an illusion of depth that doesn’t really exist. The illusory depth suggests somewhere around 114 feet, yet in actuality, it is only 29 feet deep. And the magnificent warrior at the end? He is only three feet tall! Diminishing rows of columns and a rising floor create a visual illusion.

Cardinal Bernardino Spada bought the Renaissance palace in 1632 and hired Francesco Borromini to embellish it shortly afterward. Borromini, a rival of famed architect Bernini, created his perspective among other modifications in one year.

I left that evening with a new understanding of perspective and how easy the eye can be tricked by optical illusions. Francesco Borromini was known for using this style of architecture in his buildings, including St. Agnes in Agone on the Piazza Navona. Here he constructed the facade with a concave front so that when you stand directly in front of it and look up, you can see the dome which appears much closer than it really is.

Below, I have included a short video of the perspective gallery that I found on YouTube. It gives a clear overview of this clever form of architecture that is very fascinating.

Empire of the Eye: The Magic of Illusion