When I dream of Italy, I see myself wandering along the shimmering Bay of Naples.  A mountainous backdrop rises up to meet a baby blue sky dotted with fluffy white clouds. I inhale the salty sea smell mingled with driting aromas from restaurants passed along the way.  A gentle breeze tugs at my hair as I watch several white boats skim the water’s surface, leaving a bubbling trail behind them. An old castle fortress stands high on a hilltop, its many levels adding dimension to the landscape. 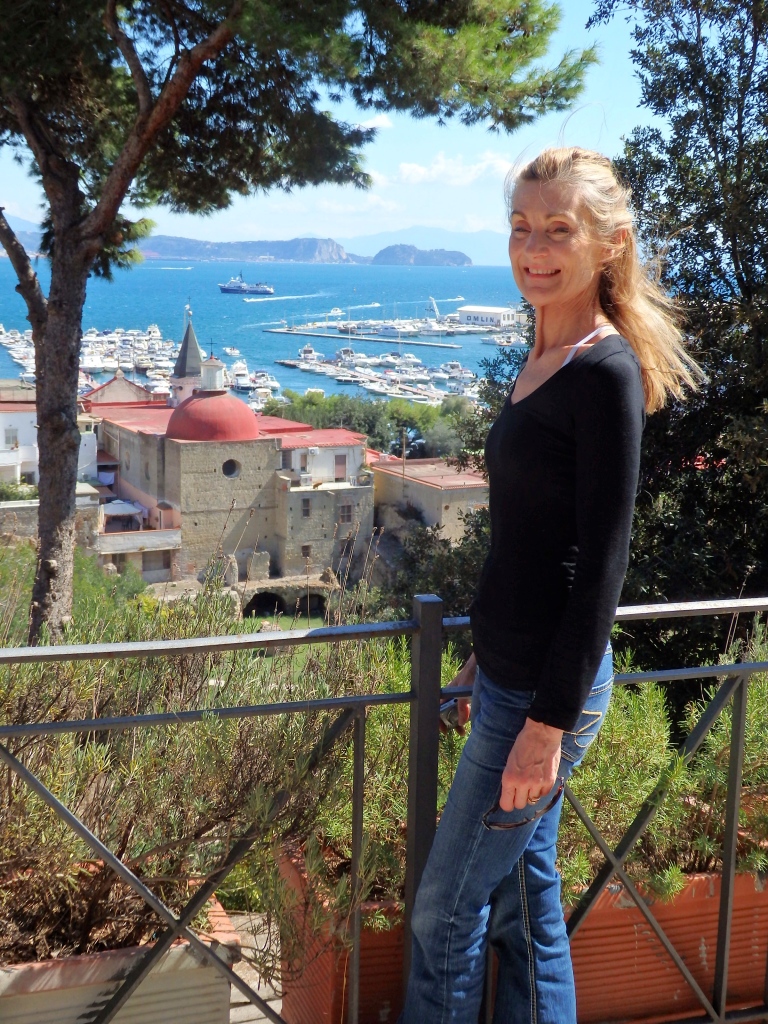 My life has been blessed with the good fortune to travel to Italy several times, and I am passionate about every region. Italy never ceases to fascinate me and each time I visit, I feel pulled deeper into its history, culture, exotic beauty and genuine people. A return visit is always on my mind.

Although the south of Italy is poorer than the north, to me it is the real Italy. It is true that transportation by train or bus can be slower and sometimes undependable, but to really see Italy and experience the culture it is essential to leave oneself a bit vulnerable. END_OF_DOCUMENT_TOKEN_TO_BE_REPLACED

San Martino, a small community high above the sprawling city of Naples, is a refuge from the chaos and confusion of overcrowded metropolitan life. With a reputation of being one of the best neighborhoods in the city, it is also the home of two outstanding historical buildings; Castel Sant’Elmo and the former Carthusian monastery of San Martino which is now a museum. As impressive as these two landmarks are, it is the sweeping view of Naples and the surrounding bay that take my breath away.

To reach San Martino at the top of the hill, I took a funicular from the crowded shop-strewn area of Montesanto. A funicular is a cable car that is pulleyed up the hillside. The neighborhood was clean and calm by comparison to the bustle below. I found it a refreshing escape. People drove normally and the streets were clear of bumper to bumper cars parked along the curb.

Once I reached the museum of San Martino on foot, which was a short uphill climb from the funicular, I was greeted by stunning views of the city of Naples below. Land and sea spanned out in every direction with a vast multitude of buildings that housed the crowded metropolis.

The former monastery, finished and consecrated in 1368, is now a museum with outstanding Bourbon and Spanish era artifacts. World-renown nativity scenes, old wooden ships, horse-drawn Cinderella carriages and several rooms of beautiful paintings brought the museum to life. In the center is a courtyard with gardens and an old monks graveyard.

This huge covered porch is part of the old monastery museum. As I walked around the entire perimeter, views of Naples, the water and surrounding districts sprawled out before me in one vast sweep. Sparkling and beautiful, my camera was fast at work in a futile attempt to capture it all.  But still the photos give a glimpse of its boundless splendor.

The inner courtyard within the museum was very old but beautifully arched. This large marble square was marked with skulls all the way around.

The Castle stands tall and mountainous next to the museum.

*
On the way back down I took the stairs instead of the funicular. It zig-zagged back and forth, providing many wonderful views of Naples as I descended. Old homes and garden walls framed the stairs tightly.

These houses were so close to the pathway that I could clearly hear conversations coming from them through the open windows. Older women were hanging their wash out to dry, and smells of cooking drifted through the air, making me hungry!

I hope to return to San Martino and stand once more at the old fortress walls to gaze out at the vast beauty of Naples with all its charms. Mt. Vesuvius, the sparkling bay, reddish-pink sunsets that streak across the sky….all that encompass the ancient symmetry of an aging land .

What was all the commotion about? Winding down from a day of exploring the ancient thermal bath complex of the emperors, I stopped by a waterfront park. I walked across the grass to see for myself. A voice over the loudspeaker was excitedly announcing a water sport competition in progress. Cheers and yells came from the crowd gathered around the embankment.

Picking my way through the spectators, I caught sight of a soccer ball flying through the air over the water. Then I saw a skirmish of paddles. Men in canoes were smacking the ball around using either their hands or their paddles. It was aggressive. I found out soon that it has a name: Canoe Polo!

Take a look at this 2 minute video I took of the game…it also gives a good glimpse of the spectators toward the end. Make sure your volume is up as the announcer is half the fun!

There is no doubt that the Italians take these games seriously and harbor competitive spirits. Supportive spectators give the teams their all. What I learned about Canoe Polo is that it begins with two teams of eight. Only 5 from each team are in the water at one time with the other three in reserve. Each ‘race’ involves two periods of ten minutes each, with intervals of five minutes. And the point of it all? To fight ones way through the onslaught of the opposing team and swoosh a ball into a suspended basket, much like basketball.

The game here was held on the Bay of Naples, but any body of water will work. Games are often played on lakes or even in pools. A helmet, life jacket and spraydeck are required to play. I had to ask what a spraydeck was, and this is what I found out. A spraydeck is a sheet of tight cloth sized to fit over the opening of the canoe to prevent water from entering the boat. Good idea, since water was splashing everywhere in the mad skirmishes and fast paddle action.

In Italy there are more than one hundred teams entered in the championships. Circolo Nautico Posillipo, a famous canoe polo club in the port area of Napoli, has won most of the titles in Italy, including the Italian Cup finals numerous times.

What a great way to spend a Sunday afternoon. A sudden glimpse into the real Italy, with its wonderful people enjoying the company of family and friends, doing what they do, is always a treasure find.

Once the exotic playground of Roman emperors Julius Caesar, Nero, and Caligula, the one-time seaside resort of Baia just north of Naples enticed and tickled the fancies of the first-century elite. Horace described it as “Nowhere in the world is more agreeable than Baia.” Pliny praised the medicinal qualities of the water.

Rich Romans built magnificent villas along the coastline that have since become submerged under water. Because the land of Baia and its surroundings are a volcanic area, the land has dropped six meters END_OF_DOCUMENT_TOKEN_TO_BE_REPLACED

Working my way down the vibrant street markets of Napoli just recently was mind-boggling. Scooters roared and car horns impatiently pierced the air. Throngs of people clogged the medieval arteries of the city, pressed in to look over and purchase their products from busy shopkeepers. Store windows behind them displayed rows of hanging tripe, lamb, and prosciutto, as well as mouth-watering bakery items and slices of pizza for a euro.

In a crowded intersection where two streets meet is Piazza San Gaetano. It was here that I found something I least expected in the heart of this bazaar world. Standing in front of me towered an old basilica. San Lorenzo Maggiore was a sight to behold. 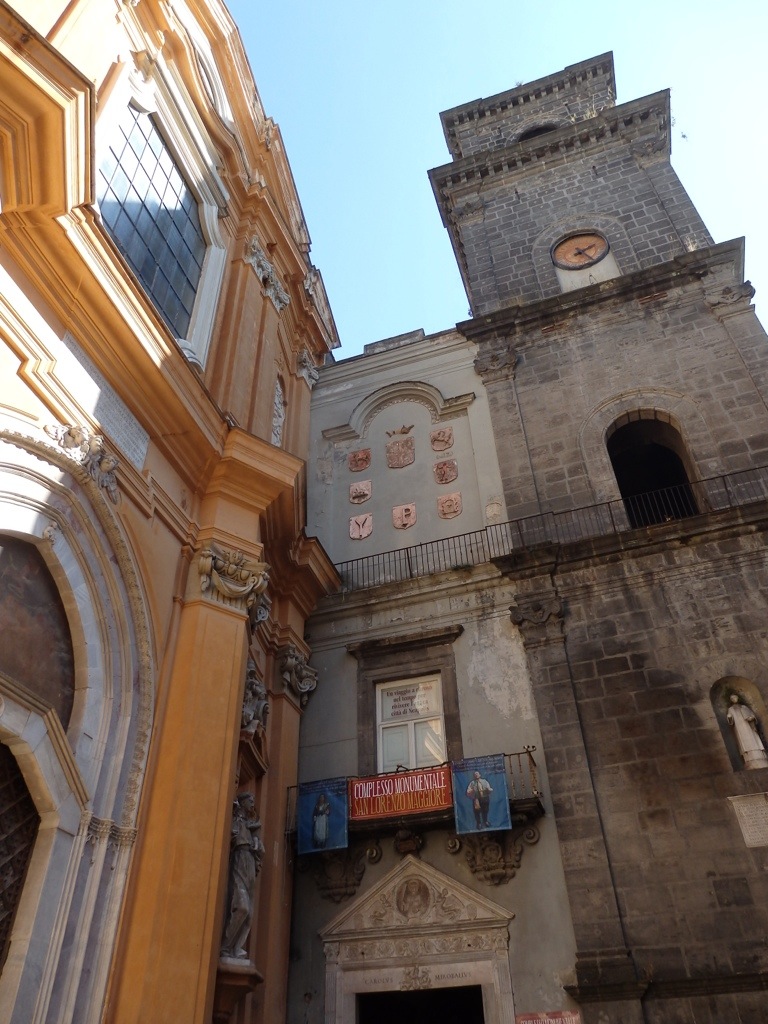 This handsome thirteenth century Gothic church was built on top of a previously existing city hall by the Franciscan order in Naples during the lifetime of its founder, St. Francis of Assisi. Evidentially, Charles I of Anjou decided to build his fortress, Maschio Angioino, where the Franciscans had an existing church. Charles compensated them by providing this site for the present church of San Lorenzo Maggiore.

What is surprising and not noticeable until you enter the building is that it is also a monastery as well as a museum. The museum takes up three floors and gives a history of the area around San Lorenzo beginning with classical archaeology.

But the most astonishing part of all are the remains of an original Greco-Roman market that was excavated over a period of 25 years and has been opened to the public since 1992. Located in the middle of the historical center that began as the Greek-Roman city of Neapolis (new city), this market is one of only a couple of large-scale Greek-Roman sites excavated in the downtown area. For those of you who love ancient Rome, you won’t want to miss this.

Very close by is the Napoli Sottoterranea, the Napoli underground which is seen only by tours, but this is not part of San Lorenzo’s underground.

The following photos were taken while I explored the area. It truly is a rare experience of stepping back in time, from the old earthy smell to the uneven stone streets and arches. However, it requires patience and some imagination to figure out just what you are looking at. There are no tour guides or audio guides, and most of the information is posted in Italian. What was labeled or partially described I have identified below the photos.

Once an outdoor street lining the doorway to small shops. This is the original street level of the ancient city of Neapolis.

Both a Greek (Agora) and Roman (Macellum) marketplace are the main discoveries that lay below the church. Dating from the sixth to the first century B.C., these streets are perfectly preserved underneath present-day bustling Napoli. Built into layers of volcanic ash and rock called tufa, these ruins are remarkably well-preserved.

Small shops, called tabernae, line the roads and each one has a skylight of sorts. They would be dank, dark and creepy without them.

In these shops it is possible to notice selling counters and wall-niches for the storage and display of various articles. Fascinating…. 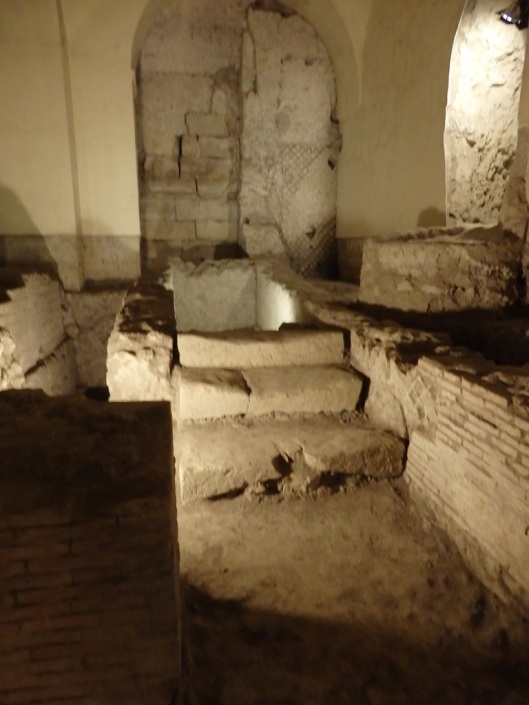 Once you are ready to return to the surface, a stairwell leads you up to a courtyard, which is the 14th-century cloister of the church of San Lorenzo Maggiore. Outside the cloister and back into the streets of Naples, it seems inconceivable that below all the surrounding congestion and frenetic activity lay a still, silent world that once was a bustling marketplace of its own.