“Tonight the sun has died like an Emperor…great scarlet arcs of silk…saffron…green…crimson…and the blaze of Venus to remind one of the absolute and the infinite…and along the lower rim of beauty lay the hard harsh line of the hills.”  John Coldstream

I couldn’t wait to watch the sun set over Florence. After a delicious dinner in the Piazza Vecchio, I crossed the Arno River and its shops of precious jewels on to the left bank and followed the road upwards. After about 20 minutes on the Viale dei Colli, which runs through the hills that surround the central area of Oltrarno, I arrived at Piazzale Michelangelo. Extremely popular with tourists and locals alike, it has the best panoramic views of the heart of historic Florence. 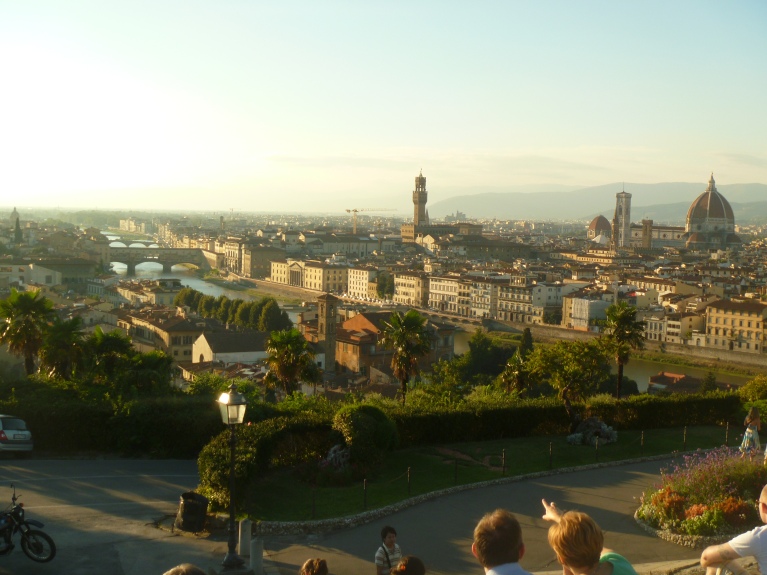 The terrace lookout gives an open cityscape that is a beloved postcard photo of the city. The Palazzo Vecchio, Duomo, Baptistry and Bell Tower loom in the background.

In 1869, designer and architect Giuseppe Poggi built the Piazzale Michelangelo while Florence was the capital of Italy. As a result, it was decided the entire city needed a risanamento, a rebirth, which involved heady urban renewal of elegant proportions. Poggi’s most outstanding accomplishment, however, was the Viale dei Colli on the left bank. At eight kilometers long, the tree-lined street winds up the hill of San Miniato, ending at the Piazzale Michelangelo.

A bronze copy of Michelangelo’s David stands in the round-about, accompanied by the Four Allegories of the Medici Chapels of S. Lorenzo. The originals are in white marble. It took 9 pairs of oxen to transport the monument up from the city in June of 1873. 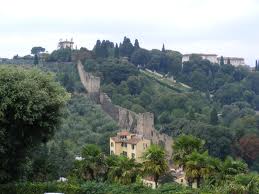 Remains of ancient city walls still surround parts of Florence in a protective embrace. From the Piazzale Michelangelo, this wall with towers runs up the side of a long hill. Begun in 1284 and completed in 1333, it is believed that it was built under the direction of Arnolfo di Cambio. The gates, no longer in existence, were embellished with religious scenes of the Madonna and Saints, standing 35 meters tall.

Most all of Florence’s history is laid out before us on the skyline. As twilight descends on this vibrant renaissance town, golden lights illuminate the stone facades of foremost landmarks. People begin to gather with iPhones and cameras ready to capture the beauty of shifting colors that begin to streak across the evening sky. All grows a bit quiet as the sun, like a golden orb, sinks slowly into the west.

My day in Florence drew to a close in the most dreamlike manner. Despite lengthy strolls through museums and dinner on the Piazza Vecchio with delicious wine, my most vivid memory is of Firenze’s dazzling rays of amber sunlight stretched out over the city in waves of crystal beauty. Breathtaking beauty….the kind that travels straight to the heart and soul, and leaves you longing for more. 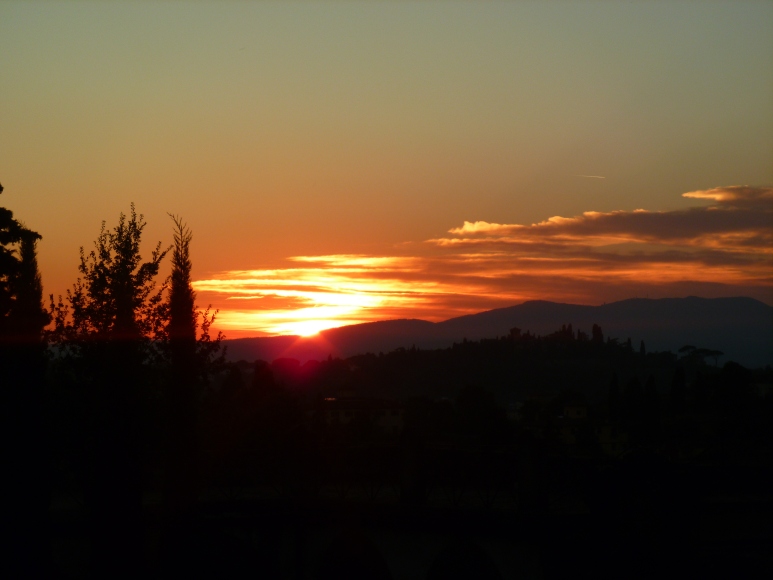