The Piazza Navona is truly a carnivale of life. With a reputation of being one of Rome’s liveliest piazze, it constantly commands a large audience of locals and tourists. Restaurants with covered outdoor tables encircle the piazza offering diners a comfortable place to enjoy entertainment by street performers, impeccably dressed Italians, and Bernini’s three beautiful fountains.

Whenever I spend time in Italy, I’ve found that the experience means so much more if I have a little background history about those places I plan to visit. My first walk through the Piazza Navona was exciting, but I wish I had delved a bit into the historical background beforehand. That being said, I encourage you do a little research of your own and make your experience so much more rewarding.

Let me share a little bit of what I’ve learned….

The Fountain of the Four Rivers, designed by Bernini in 1648, is my favorite. Water gushes up out of rocks forming an aqua blue pool at the basin while the four continents, or river gods, hang on and ride the waves. They are The Danube (Europe), The Ganges (Asia), The Nile (Africa), and The Rio de la Plata (The Americas).

Each river-god contains a symbolic item. The Rio de la Plata above sits on a pile of coins which represents the riches America could offer Europe.

The Nile river-god covers his head, representing the idea that no one knew where the Nile originated at that time. 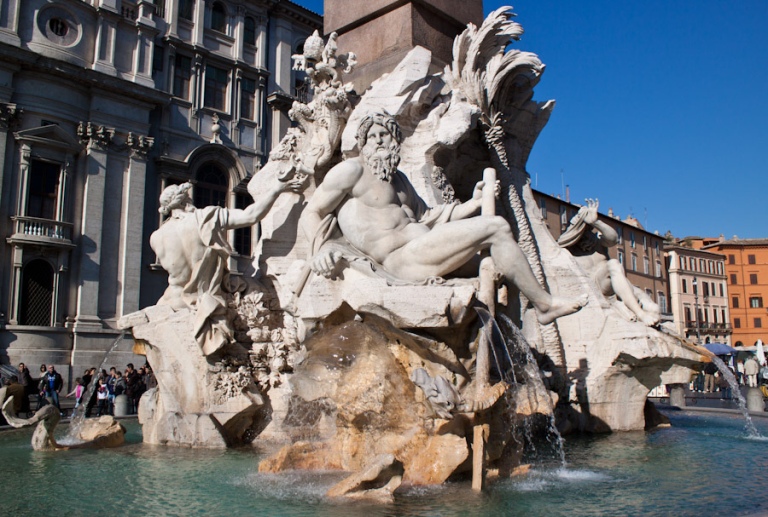 The Ganges, above, holds a long oar that represents the river’s navigability. And finally, the Danube, to the left, holds the pope’s personal coat of arms since it is the largest river closest to Rome.

A surprising detail concerning the creation of the fountain in 1646 was that Pope Innocent X had it built at the public’s expense. It took place during the years of a terrible famine in Rome so, naturally, the people threatened to riot. Notes of despair were found on the monument expressing anger with the words, “we do not want Obelisks and Fountains, it is bread that we want.” However, the pope chased the rebel-rousers out along with the market, which was moved to the Campo di Fiore.

The oval-shaped Piazza Navona was built on former emperor Domitian’s stadium in 86 AD. Paved over in the 15th century, remains can still be seen of the stadium under the piazza.

Through the construction of this fountain the pope intended to proclaim the churches influence on the four continents to be very strong, spreading to all four corners of the Earth.

If you find yourself in Rome, it’s highly likely you’ll find your way to Piazza Navona. Stand back and marvel at the dramatic beauty of the fountain and recall to mind not only the historical implications, but also the hardships it required of the people of Rome.

While strolling through the Piazza Navona one summer evening with a gelato in hand, I thought of all the reasons why this particular place holds such an attraction for me. The atmosphere after dark is especially inviting.

1. The long and lovely string of restaurants and cafes that line the perimeter, providing excellent seating for people-watching while enjoying a caffe or vino with snacks. I love the low hum of human voices accentuated by spurts of laughter.

2. Street performers, musicians and artists showing off their talents with gusto.

4. Three huge exotic fountains with stunning baroque sculptures which light up at     night from underwater lights ~

– Bernini’s “Fountain of the Four Rivers” with the ancient Egyptian obelisk in the center.

– The “Fountain of the Four Tritons” with Bernini’s African wrestling a dolphin.

– The “Fountain of Neptune.”

I love the entire effect of the soft lights shining from below these statues which cast a ghostly glow across their features. The trickling water from the fountains is transporting.

5. The knowledge that underneath the piazza was once a former arena built by Emperor Domitian and used for athletic competitions during the first century. I am so amazed by the historical happenings below my feet.

6. Lovely baroque dome and two “towers” of the 12th century Church of Sant’Agnese in Agone located in the center of the piazza.

7. The Palazzo Pamphilj next to the church, which was a family palace of Pope Innocent X. It was he and his family who instigated theatrical events on the piazza during the hot August weekends from 1652 – 1866 by flooding it in preparation for elaborate celebrations such as mock sea battles with real little ships.

By now I’ve walked off my dinner and finished my gelato. Time for a glass of red wine before I head back to my room. The waiters grow a bit flirtatious as evening progresses. I don’t mind. We enjoy a good laugh as I finish my glass. Slowly, I walk once more through the piazza, inhaling all the sights and sounds that I long to remember.