I felt like I had just stepped into the Hobbit’s Shire when I arrived in the small whitewashed village of Alberobello. Little people scampering in and out of the tiny cone-roofed houses with hairy feet didn’t appear, however. Instead, the village streets were packed with big people like myself, exploring the rows of cone-roofed trulli that proved to be anything from gift shops to restaurants. Bizarre and quirky? By all means, yes.

Surrounded by ancient vineyards, medieval castles, and white-sand beaches, Alberobello sits at the top of the heel that makes the boot of Italy. Not far from the Adriatic coast, it is understandably a magnetic tourist attraction.

So what exactly are these strange little cone-shaped cottages? The Trulli are  limestone dwellings that are mortarless, using prehistoric building techniques. The pyramidal, domed or conical roofs are built up of corbelled (stone slabs that progressively overlap each other) limestone slabs. Common in the Itria Valley in Puglia, they have appeared here since the mid 14th century. Trulli can be found all the way from Celtic Ireland down to Sardinia and across to Puglia.

But why the unique construction? One big reason was the need for a dwelling that could be easily dismantled before inspectors arrived to enforce paying higher taxes on the property – thus the need to be mortarless. They were used for agricultural activities as well as comfortable housing for the rural population.

However, the golden age for the trulli began in the 19th century due to wine production. Today, fewer are used as a permanent dwelling and many are being converted into Bed & Breakfasts and shops.

Let’s take a peek inside of one… 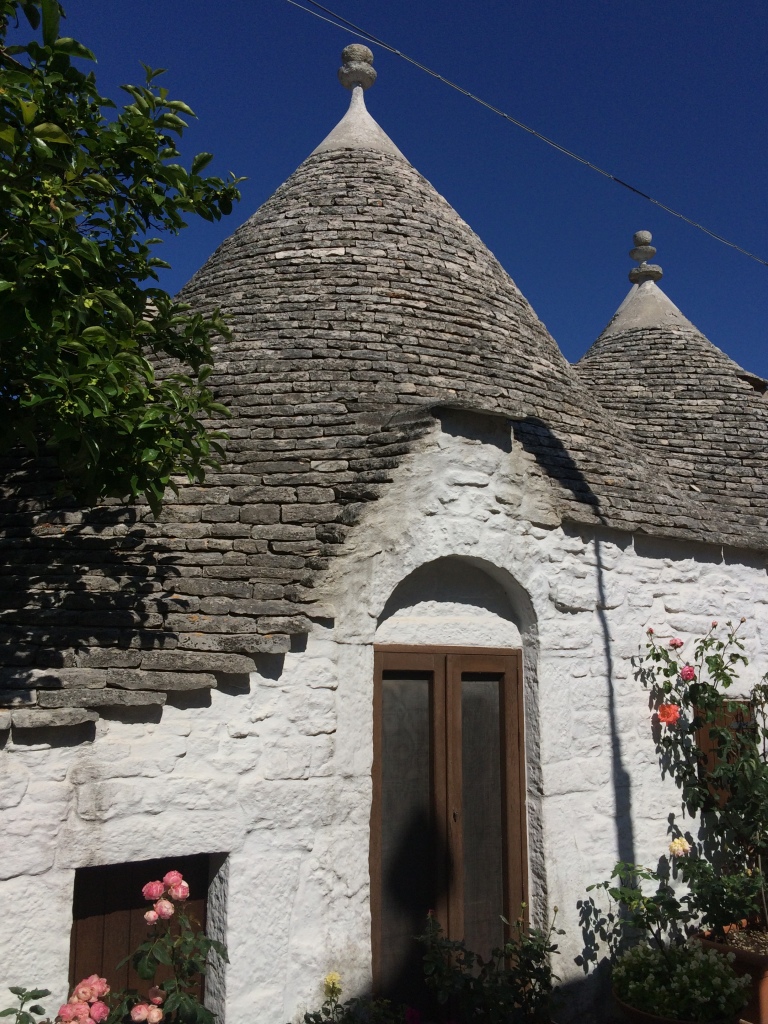 Most of the traditional trulli include one room under the conical roof with added living space in arched alcoves with curtains hung in front. However, many of the trulli converted into B&B’s are embellished and more expansive. They usually have an open fireplace with a chimney stack, but they are difficult to heat because of the conical roof. The thick walls keep them cold in the winter. The lack of windows and tall conical roof give it a cave-like feel.

As I walked through this trullo, which didn’t take but a few minutes, I was charmed. The light-colored brickwork helped to brighten a room that otherwise would have been much more like a cave. Although it was small, I could definitely cozy up here for a short stay. Everything I need is literally at my fingertips, and when I step outside the doorway, I’m greeted by bright sunshine that reminds me of Dorothy’s Oz. 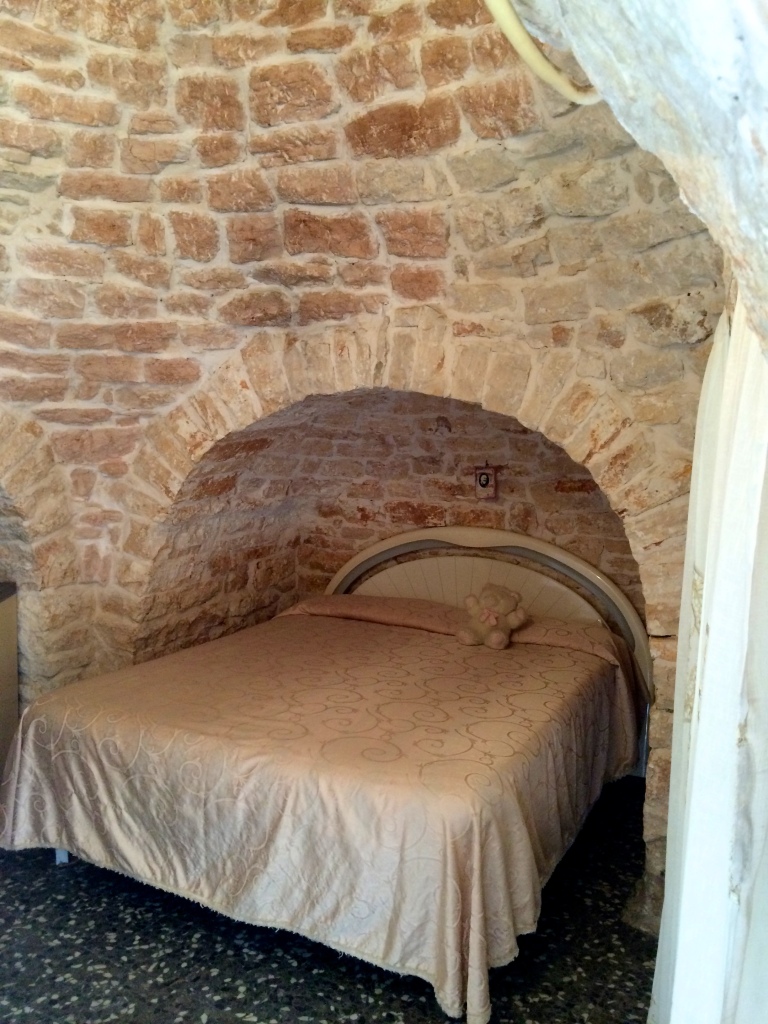 Bed partially nestled into an alcove 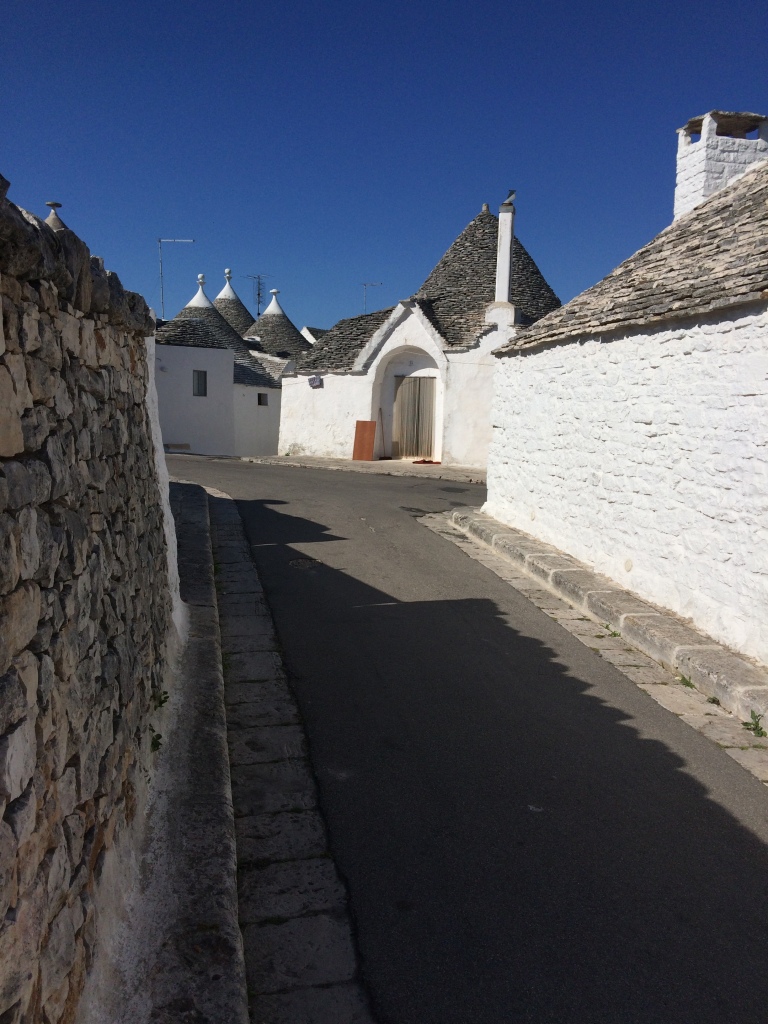 Clean, neat and tidy, the trulli streets in Alberobello are a pleasure to walk, shop, taste the authentic cuisine of Puglia, and meet the locals.

Have you ever been to see a trullo? If so, please leave your thoughts here in a comment below. Andiamo! 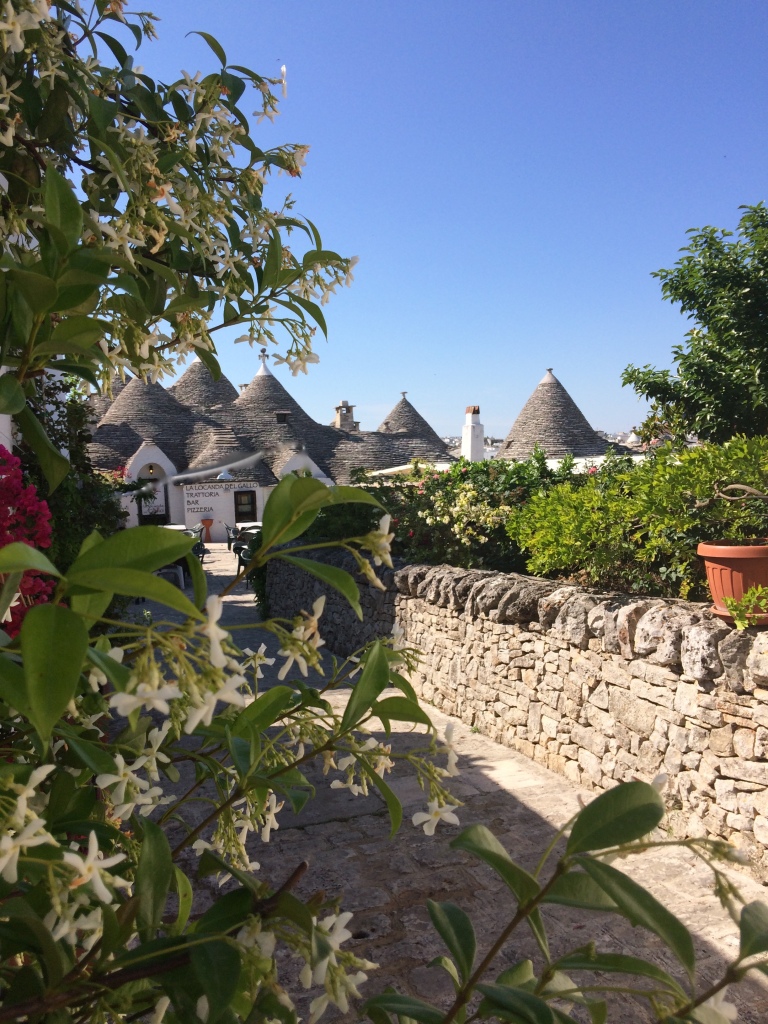 If you would like more information regarding a trullo stay, I suggest you check out Trulli é Puglia. To be clear, I have not personally had any experience with them as I went on a group tour and did not spend the night in one, but I feel that this is authentic as it is locally operated.

‘Puglia, Land of Wine’ from winesofpuglia.com

‘Characteristics and Distribution of Trulli Constructions in the Area of the Site of Community Importance Murgia of Trulli’ from agroengineering.org

29 thoughts on “Step Inside a Trullo in Puglia”