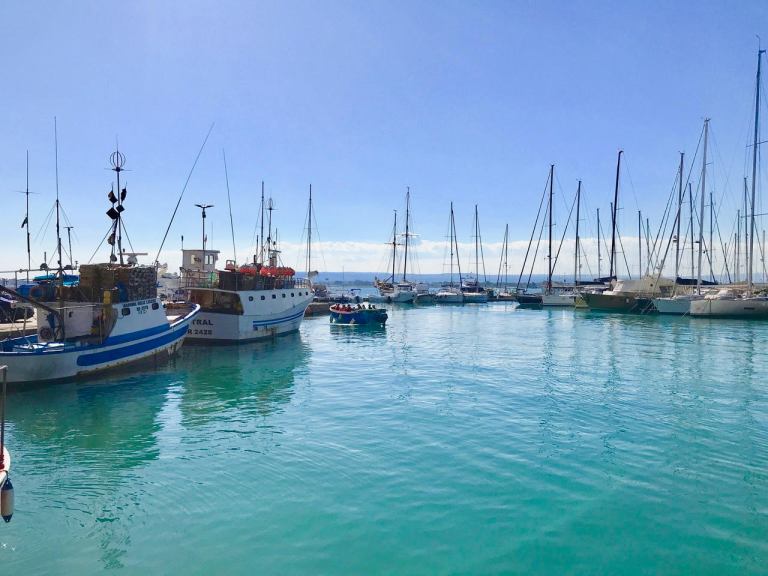 The sun-splashed lungomare d’Ortigia is a sensual delight. Recently, I had made the drive to Ortigia from my lodging at Hotel Bosco Ciancio on the slopes of Mt. Etna to meet with my tour guide,  Marco Sanzaro. My goal was to discover the wonders of the island of Ortigia, the historical heart of the ancient Greek city of Syracuse on Sicily’s eastern shore.

As I walked the footpath that followed the waterfront, I couldn’t help but notice the brilliant green waters of the Ionian sea lap against the shore as it gently cradled boats in the harbor.

I was delightfully met with delicious aroma’s emanating from the doorways of restaurants, bars, and trattorias that lined the shaded sidewalks. Tables of outdoor diners were engaged in conversation while enjoying a meal and sipping their wine. I passed soft voices, bursts of loud chatter, laughter, and even periods of silence. Land and sea blended well together in a natural rhythm of past and present.

I met Marco Sanzaro in a small piazza not far from the Cathedral of Syracuse. He arrived a few minutes early and I recognized him not only by his photo but also by his name tag which read Regione Siciliana Guido Turistica. Marco and I connected instantly and the next two hours proved to be packed with one of the most interesting history lessons I can remember, followed by a delicious authentic Sicilian dinner.

Marco grew up in a house very close to where we met and has been a lifelong resident of Ortigia. He is passionate about his hometown, the beauty, and history that goes back more than 2,500 years.

We began at the Cathedral of Syracuse, just a stone’s throw away in Piazza del Duomo. It is a pedestrian-only square located in the center of Ortigia. The Cathedral, constructed by Saint Bishop Zosimo of Syracuse in the 7th century, was built on top of the ancient 5th century BC Greek Temple of Athena. Some relics remain, including several Doric columns that have been incorporated into the walls. 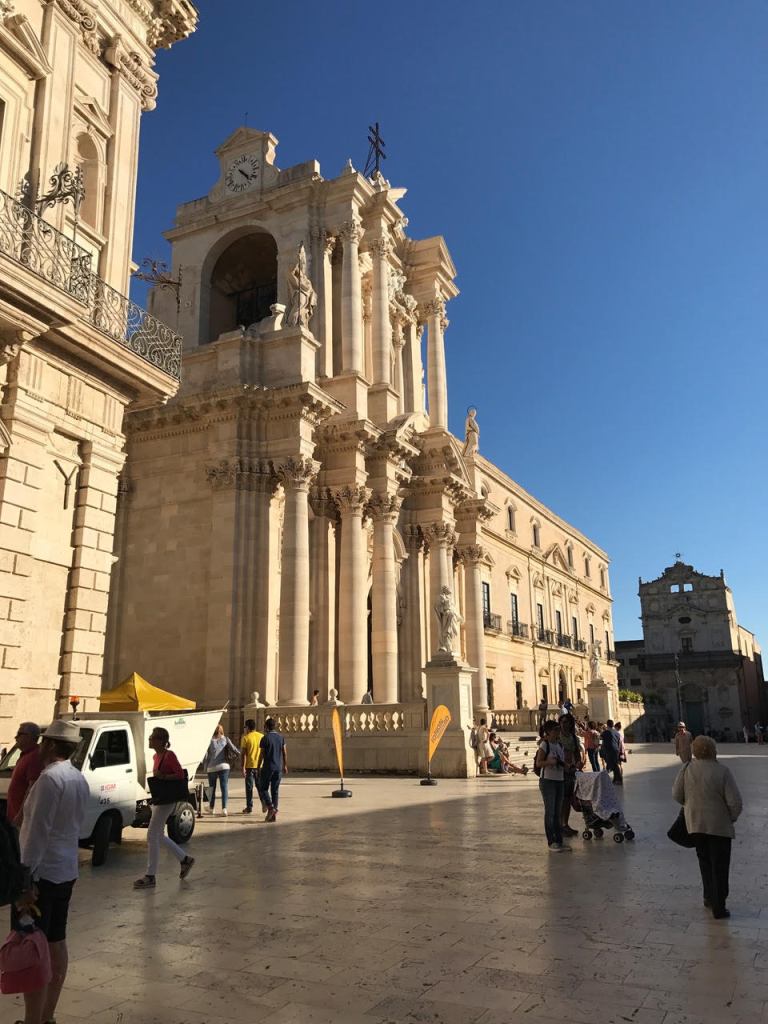 The baroque facade includes Acanthus leaves in its Corinthian columns. An earthquake in 1693 damaged the Cathedral, which began reconstruction in 1725. Today, it is classified as High Sicilian Baroque.

Inside the Cathedral is a combination of rustic walls with baroque touches. The baptismal font below dates from the 12th century.

The Cathedral is included in the Syracuse UNESCO World Heritage Site as a major monument of the historical core of Syracuse. 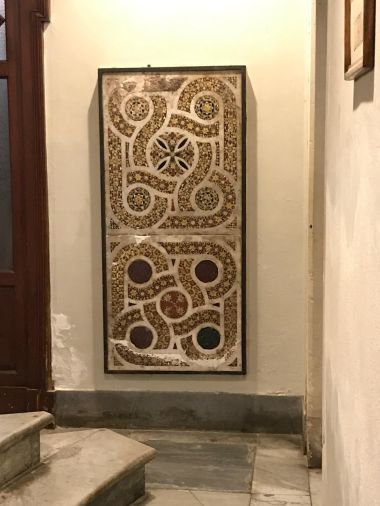 We left the Cathedral and wandered the cream-colored paving stones past outdoor markets, shops and gelateria. Notice the crenelations that run along the top of the Cathedral’s flank. 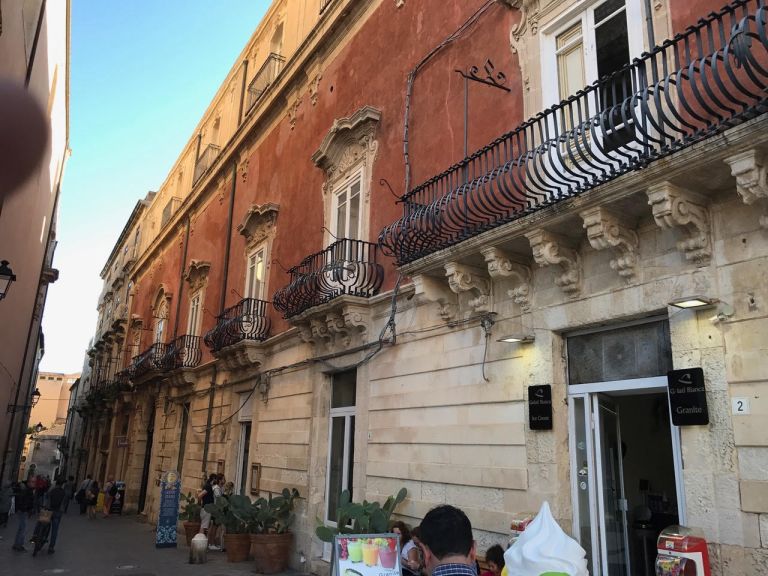 Our next stop was the 6th century Temple of Apollo in Piazza Pancali. The remains are nestled in a garden of palms and green spaces. It’s the most ancient Doric temple in Sicily and through the centuries has undergone many transformations. The temple was constructed with forty-two monolithic columns which were most likely transported by sea. It must have been an incredible building, especially for its time. At the top step of the eastern face, an inscription by the architect, or builder, celebrates the construction of the temple with an emphasis on its exploratory attributes.

Marco was very knowledgeable and shared the historical aspects of the Temple of Apollo with much enthusiasm.

We ventured on toward the sea where we stopped at the Fountain of Arethusa. As the legend goes, an Arcadian nymph fled underwater to Syracuse to escape the river-god Alpheios’ advances. The nymph, who was the goddess Arethusa, in resignation, transformed herself into the freshwater spring that we see today.

Nearby is a flowing statue of the river-god Alpheios and the goddess Arethusa.

The Fountain of Arethusa is one of only two places in Europe where papyrus grows.

We spent a wonderful afternoon walking the historical district of Ortigia while discussing legends, cultural influences, and the city of today. Marco greatly enabled me to orient myself to Ortigia as well as understand the past and present, all of which added a lot of depth to my experience. Before parting ways, Marco recommended a restaurant that we were eager to try. It proved to exceed our expectations with its delicious authentic Sicilian menu.

The Perle d’Ortigia is a welcoming place with a rustic arched interior accented by green palms. Seafood is a specialty here, and the menu includes several options made from the fresh catch of the day. Fish fillet of amo in nuanced brandy with hedgehog sauce or octopus steeped in nero d’avola are a few options along with daily homemade pasta embellished with Sicilian ingredients. We were more than pleased to rest our feet while tasting some of Ortigia’s finest cuisine. 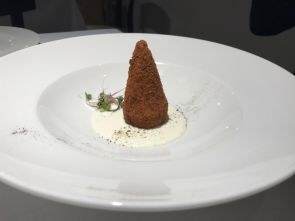 Syracuse and Ortigia are a place on the eastern seaboard of Sicily not to be missed. The beauty, history, cream-colored buildings and walkways, the early evening passeggiata, and the open friendliness of the locals are good reasons for me to return.

Have you been to Sicily? Syracuse and Ortigia? What was your impression? I would love to hear from you. Please feel free to share your thoughts below.