The rolling hills of Tuscany are alive with endless rows of vines. In fact, wine is produced over most of the territory in this region of central Italy. The passion, gusto, and delightful flavors of the wine is directly related to the heart and soul of this beautiful land full of myths and legends. However, the historical truth is much more interesting.

The wine of Tuscany is cultivated with great passion in Chianti, the hills around Montalcino, the vineyards of San Gimignano and the Lucchesia. Vines grown in the Livorno Hills and the Maremma near the coast carry strong sea notes. Those in the Sienese countryside taste of the warmth of the sun combined with the richness of the soil.

Giacomo Tachis, Italian wine expert, and creator of the Sassicaia wine describes the Tuscan vineyards with passion. “Here there is light, the sun. Radiant sunlight and the right soil are the soul of wine. But the tradition of the countryside and the memory of men are the solid basis of the extraordinary Tuscan wine culture.”

From antiquity, the fruit of the vine has been highly esteemed. Gilgamesh, an ancient Sumerian king, was certain that the secret of immortality could be found in the grapevine. It was during this time that the vines of Tuscany were planted along the sea in Maremma and the coastal regions south of Livorno. It was here that the cradle of Tuscan wines began. 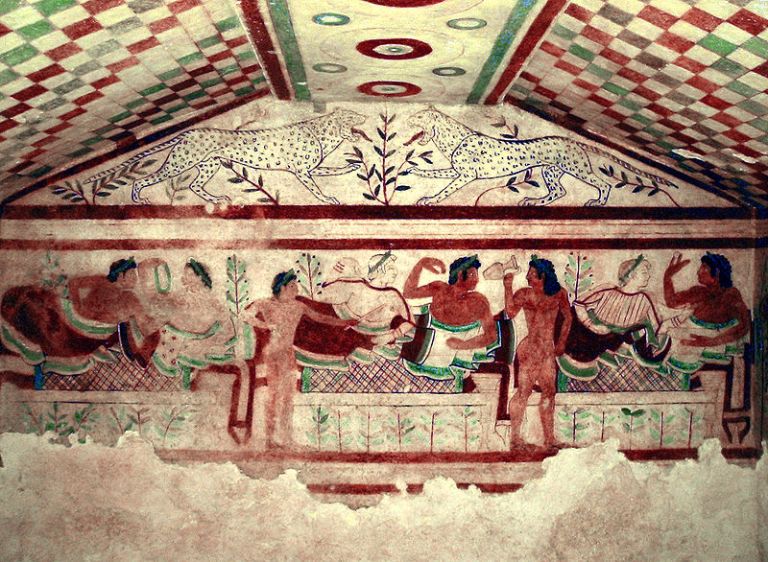 The Etruscans, a fascinating ancient people of the region, made the cultivation of grapevines an important part of their agriculture. The grapevines of Etruria grew strong and wild. They produced so many grapes that Etruscan merchants sold them from the beginning to markets beyond the sea. The Greeks called Tuscany ‘Enotria,’ the land of wine.

The Middle Ages brought about the emergence of vineyards planted by merchants across the Sienese countryside.

Christianity made wine a sacred implement of worship. As a result, the church fathers began to cultivate vineyards around walls of churches, monasteries, and convents. The Benedictine monks, who began growing grapes as early as the 4th century, compiled manuals on grape cultivation. They were known for their highly successful agricultural practices.

Interesting to note, wine consumption in the 14th century was astounding. The average male Florentine consumed 293 liters a year. The Sienese were even more impressive at 419 liters per man. Compare these numbers to the average consumption of 60 liters today. Wine, apart from water, were the only drinks available at that time.

Vernaccia, a strong red grape, made its appearance from Greece in the Middle Ages and quickly encircled the towers and walls of San Gimignano. Vin Santo, a white sweet wine, was used by a Franciscan friar to soothe the agony of plague victims in 1348. It became known as the holy wine. The highly esteemed red Vermiglio began to be cultivated between the Middle Ages and the Renaissance.

By 1427, according to the first Tuscan land registry, Tuscany was producing an incredible 14,000,000 liters of wine.

During this time, Cortona was producing a golden-yellow Trebbiano wine which is now one of the most widely planted grape varieties in the world. Montepulciano wines were known to be robust red, full, and fragrant. The San Cassiano hills near Florence were producing famous red wines, while Montalcino became known as the land of the delicious Brunello.

The Sangiovese grapevine emerged in the Sienese hills during the early 1700’s. This was to be the first step leading to Chianti, the historic area of central Tuscany known for its great red wines. It is a triangle of land that lies between Greve, Radda, Castellina, and Gaiole. Chianti wine became so important to the Sienese economy and Florentine region that by 1903 an association was formed to protect its quality. In 1931, the boundaries of Chianti vineyards were established.

Historian Zeffiro Ciuffoletti sums up the development of Tuscan wine perfectly. “Tuscany, as regards wines, has no equal the world over, thanks to a most felicitous nature, and to a civilization of the grapevine and of wine that has been decanted and refined over the centuries.”

I hope you found this brief history of Tuscan wine as fascinating as I did. What aspect of its history do you find most interesting? What has been your experience with Tuscan wines? Please share your thoughts in the comments section below. I’d love to read them!

31 thoughts on “An Intriguing History of Tuscan Wine”