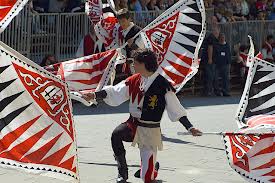 Imagine two rival families in the same village fighting for supremacy, leading to a period of enmity for over two centuries. Not unlike the Capulet’s and Montague’s of Romeo and Juliet, the Fiumi and Nepsis families from 1300 Assisi did just that. Today it is re-enacted, although in a much more neighborly way, which culminates toward the end of the Calendimaggio.

A most worthy event, the Calendimaggio was originally an ancient celebration of Spring May Day. Today it is a three-day festival held the first Thursday, Friday and Saturday of May. Traditionally, the festival is dedicated to St. Francis, since he was known to be a poet, troubadour and dancer in his youth. Locals carry on by dressing up in lively and colorful medieval costumes while putting on three days of festivities and competitions with love songs, games and events. Groups of revelers serenade throughout the streets of town, bringing a spirit of romance and chivalry.

The long-standing rivalry between the warring families is a more recent historical addition to the festival. Deep divisions were created and hatred continued until the mid 1600’s, when the Papal Governor, Giovanni Andrea Cruciani, organized the town into three districts.  As a result, the hatred slowly gave way to harmless rivalry, making the Springtime ritual develop into a playful contest between the two rival sides. Peace and Friendship celebrated the annual Return of Spring.

A Festival Queen is chosen through an animated contest of medieval games, held in the Piazza del Commune, the main piazza of Assisi.  Flag throwers show off their expertise as Minstrels sing troubadours songs to the new Queen. Illuminated by torchlight, the games and contests continue.

Parades, floats, and animated dancing flow throughout the flower-strewn cobbled streets of Assisi.

The festival leads to the famous Palio, a contest between the two neighboring districts of Assisi. They are the Magnifica Parte de Sotta and the Nobilissima Parte de Sopra. This event mirrors the centuries old feud between the Fiumi and the Nepsis families.

Archery, Crossbow and Chivalrous contests thunder throughout the Piazza del Commune. The two opposing sides perform amidst a spectacle of color and flurries of banners. A sporadic drumroll keeps the tension high.  The grand award is called the Palio, a banner the prevailing “Parte” will keep for a year. Calendimaggio is Assisi’s only secular celebration even though the banners, at the beginning of the festivities, are blessed in the churches.

On the final eve a panel of judges, composed of historians, directors and musicologists, award the team that displays the best interpretation of celebrating the return of Spring. All done in good jest, the festivities are capped off with feasting and well-wishing. Until next May, the winning team reigns as supreme.

Announcing the New monthly Newsletter for Timeless Italy. I’m excited to share tidbits of Italy, from Travel Tips to History, Politics, Fashion, Food & Wine, Art, and Culture. Plus a monthly calendar of upcoming events. Sign up to receive your monthly Newsletter today! 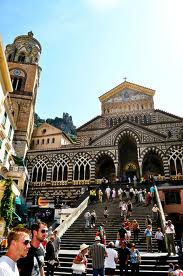 3 thoughts on “Calendimaggio–Assisi’s May Day Revelry”